The weekend starts here .
Weekdays from 6am to 5pm

Thousands of twins meet in Oman!

More than 3,000 twins took part in the first-ever twins gathering in Oman at the Oman Automobile Association Speed Arena. Among them were Royal family twins HH Hatim bin Turki al Said  and HH Dr Rawnaq bin Turki al Said who were the chief guests. They opened the event by releasing pigeons into the skies. 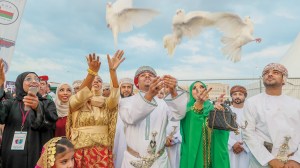 “Joining thousands of fellow Omani twins was a proud moment for us. Moreover, it coincided with the 49th National Day celebrations,” Hatim told the Observer. “We thank the organisers for hosting such a big celebration as part of the National Day. We visited all the stalls at the venue and they had done an excellent job,” Dr Rawnaq said. The ‘Twins Gathering’ was organised by Omani Business Services Centre (Tasaheel) in coordination with the OAA. Apart from twins, the gathering included triplets and quadruplets with age ranging from toddlers to senior citizens. Twins from other GCC nations and residents in Oman also were part of the show.

HH Sayyidah Hujaija al Said, one of the guests, said she was excited to become part of the event also attended by Dalia al Bassami, wife of Dr Abdulmunim bin Mansour al Hasani, Minister of Information, along with her twins Munther and Misk. Different stalls were available at the venue which ranged from painting exhibition by College of Design to bird exhibitors, who caught attention with the colourful Macaw parrots. Cultural events, dance, entertainment and fashion shows were staged at the main stage while the second stage saw presentation of folklore, children’s performances, discussions and interactive sessions. Game pavilions attracted the children while food court catered all at the venue. Ali Khalfan Salim and Turkiya Saif Saud were happy for their nine-year-old twin daughters Mohara and Meera. “We are really excited as our daughters to attend this great event,” Ali said.

Twenty-year-old pairs Majdi al Diyabi and Amjad al Diyabi are big fans of the Oman football icon Ali al Habsi. “We are always together and we are good friends as well,” the twins, who are third-year engineering students at Sultan Qaboos University, said. “We both want to become mechanical engineers,” they said. Mohammed al Balushi, CEO of Tasaheel, said he was inspired by his own three-year-old daughters Sarah and Fatma to moot such an event. “After seeing the success of the inaugural edition, we are determined to make this an annual event, coinciding with the National Day celebrations,” Mohammed said. Another twin sisters joining the party were 16-year-olds Mitha Fadi Atwi and Nassra Fadi Atwa along with their younger sister twins 14-year-olds Rawan and Gzlan. “This is great fun and entertainment for us,” Mitha said.

Omantel are supporting The Sultanate's fight...

The Buzz : Everything You Need To Know Today

Twitter's CEO Jack Dorsey is to allow its employees...

The Buzz : Everything You Need To Know Today

Warner Bros. is hoping that production will...

WATCH: Oman’s Minister of Health shares message of thanks to expats.